There really was an Internet toaster. Dan Lynch, President of the Interop Internet networking show, told John Romkey at the 1989 show that he would give him star billing the following year if he connected a toaster to the Internet. Who could have resisted a challenge like that?

Working together with his friend Simon Hackett, John Romkey rose to the occasion and connected a Sunbeam Deluxe Automatic Radiant Control Toaster to the Internet, becoming the hit of the 1990 Interop. A picture of Hackett demonstrating the toaster is shown below. 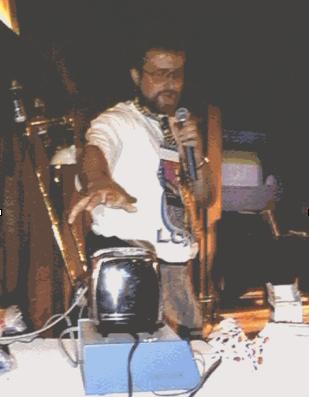 The toaster was connected to the Internet with TCP/IP networking, and controlled with a Simple Networking Management Protocol Management Information Base (SNMP MIB). It had one control, to turn the power on, and the darkness of the toast was controlled by how long the power was kept on.

However, a human being still had to insert the bread. At the 1991 Interop a small robotic crane was added to the system, also controlled from the internet, which picked up a slice of bread and dropped it into the toaster, automating the system from end-to-end.