The ARPANET was the first wide area packet switching network, the “Eve” network of what has evolved into the Internet we know and love today.

The ARPANET was originally created by the IPTO under the sponsorship of DARPA, and conceived and planned by Lick Licklider, Lawrence Roberts, and others as described earlier in this section.

The ARPANET, and so the internet, was born on August 30, 1969, when BBN delivered the first Interface Message Processor (IMP) to Leonard Kleinrock‘s Network Measurements Center at UCLA. This was long before commercial internet providers came onto the scene, however. The IMP was built from a Honeywell DDP 516 computer with 12K of memory, designed to handle the ARPANET network interface. In a famous piece of Internet lore, on the side of the crate, a hardware designer at BBN named Ben Barker had written “Do it to it, Truett”, in tribute to the BBN engineer Truett Thach who traveled with the computer to UCLA on the plane.

The UCLA team responsible for installing the IMP and creating the first ARPANET node included graduate students Vinton Cerf, Steve Crocker, Bill Naylor, Jon Postel, and Mike Wingfield. Wingfield had built the hardware interface between the UCLA computer and the IMP, the machines were connected, and within a couple of days of delivery the IMP was communicating with the local NMC host, an SDS Sigma 7 computer running the SEX operating system. Messages were successfully exchanged, and the one computer ARPANET was born. A picture of Leonard Kleinrock with the first ARPANET IMP is shown below (click on the picture to link to a larger image on Kleinrock’s home site). 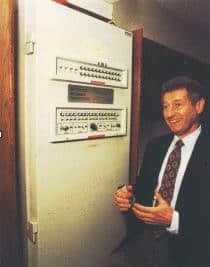 The first full ARPANET network connection was next, planned to be with Douglas Engelbart‘s NLS system at the Stanford Research Institute (SRI), running an SDS-940 computer with the Genie operating system and connected to another IMP. At about 10:30 PM on October 29’th, 1969, the connection was established over a 50 kbps line provided by the AT&T telephone company, and a two node ARPANET was born. As is often the case, the first test didn’t work flawlessly, as Kleinrock describes below:

The Culler-Fried Interactive Mathematics centre at the University of California at Santa Barbara was the third site added to the ARPANET, running on an IBM 360/75 computer using the OS/MVT operating system. The fourth ARPANET site was added in December 1969 at the University of Utah Graphics Department, running on a DEC PDP-10 computer using the Tenex operating system. These first four sites had been selected by Roberts to constitute the initial ARPANET because they were already DARPA sites, and he believed they had the technical capability required to develop the required custom interface to the IMP.

Over the next several years the ARPANET grew rapidly. In July, 1975, DARPA transferred management and operation of the ARPANET to the Defense Communications Agency, now DISA. The NSFNET then assumed management of the non-military side of the network during its first period of very rapid growth, including connection to networks like the CSNET and EUnet, and the subsequent evolution into the internet we know today.

Milestones. Some of the milestones in the early history of the ARPANET are summarized below:

Resources. The following site provides more information about the ARPANET.